The K-ON! 5th Anniversary figures are damn fine but they can run high prices. If you just want to get cool figures but don’t want to drop the money…well you can always try Chinese knock offs. I took a chance and ordered this Azusa figure, see how it turned out. 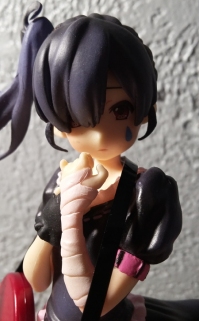 Most important things first, the figure arrived packaged snug in a rather small cardboard box. There where no problems with shipping and nothing was broken, all parts where included and separately wrapped with care. It took about a month and a bit to show up, so not bad for a Chinese shipment. On first impressions I didn’t notice many issues, a few paint bits that I’ll get into later, but everything looked fine. No weird mold problems. The stand is the same and has a small peg which has two holes, this clicks into Azusa’s right foot. It’s slightly wobbly but secure enough.

Her guitar, Mutton or as I like to call it Moe Cobain was better then expected. It has tiny strings and actually is molded very well. The high e string however does not fit on the nut and hangs off the end, there is only room for 5 strings up there, so unless you want Azusa to become Keith Richards this is a little off but nothing terribly bad as it fits into the tuning peg just fine. The strap looks like a piece of film or something. Looking at her hair it looks like it’s made of two pieces and could snap off. Her ponytail and scalp are nearly two different colours and there is a mark on top of her head. There is a scuff on her cheek to.

As for the figure itself, we have Azusa in a nice black dressy outfit with pink highlights. Instead of her classic twin tails, her blue-ish black hair is done in a side ponytail and she’s given emo bangs over one eye, with the other side parted to reveal a dramatic tear drop, like Peter Criss’ make-up towards the end of KISS’ Farewell tour. Her skirt really flies up at the bottom and her white panties are easily seen from behind. She has a second grey skirt underneath as well.

Her clothes are done fairly, a couple of scuffs and off colour bits like a drip of pink on her breast and the lines for her pink ribbon, which would tie her top together in the back, are done cheaply. Her body is done well, with the arc in her back and definition of her torso. The shoes however look cheap and there are plenty of off line bits of black on her legs. The bandages on her left arm have a pink tint, generally it looks okay, her other arm is gloved.

The figure comes with another arm so she can hold her guitar on the ground. Her right arm slides off from the sleeve. The other arm can’t hold the guitar at all, so you have to awkwardly place it against her. If you put the guitar over her shoulder she has this odd claw grip. Perhaps her Ramones technique. Also included is the HTT star which connects all five figure bases together I believe. Overall the figure is super solid for a knock off which cost just about $20 CAD with shipping! WITH SHIPPING. I can’t complain too much about the little scuffs and paint flaws for a price like that. 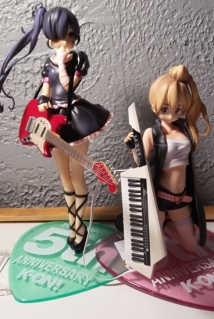 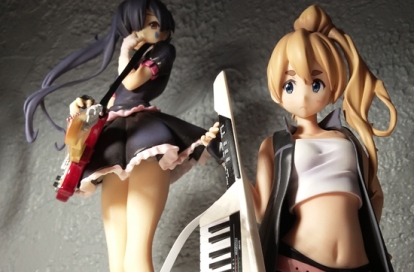 Put beside my official 5th Anniversary Mugi figure you can see clear differences in materials. Mugi is a lot smoother, with much better molding and basically no paint issues. The bases are the same quality but mold wise you get what you pay for. The official is of high quality, and the knock off is a cheaper version, both in terms of make and price. The official ones will run over $100. I don’t remember what I paid for Mugi but it was a con price, it was there and I couldn’t say no. It’s good but for a knock off this Azusa is very solid.

Here she is next to my other Azusas, both prize figures under $60. Looks pretty odd but even comparing the guitar one next to her you can see clear differences in mold. I purchased the knock off on AliExpress, a site you have to be very careful with as it’s a marketplace like eBay. If you are interested in purchasing this Azusa, or any knock off figures I would urge you to browse around for the best price, look into the sellers, read their feedback and in general be very cautious. Be aware that sellers often put official pictures as the featured photos, but sometimes you will see the real figure below.

This Azusa differed from photos, the pictures attached to the sale had the guitar with solid strings instead of these stringy ones. Other photos had her leaning over like Michael Jackson in the Smooth Criminal video. Fortunately the figure I got has neither of those issues. For a very cheap knockoff I am happy with this Azusa, it’s not high quality but there are not many issues with it! You get what you pay for.

I like to talk about things and stuff. It's cool.
View all posts by Kanttila →
This entry was posted in Figure Review and tagged 5th anniversary, anime, azusa nakano, chinese knockoff, figure, k-on, knock off, Review, thoughts. Bookmark the permalink.